A beautiful morning on the Moose River

The morning of our fourth and final day on the Moose River Loop was by far the most beautiful.  We packed up and hit the river by 5:30 a.m., before our river right neighbors across the way.  There was a light fog that covered the river for hours- a photographer’s dream!  The river was peaceful and calm, reflecting the trees along the riverbank like a mirror.  We paddled with stealth, hoping to have the chance to see another moose, but didn’t.  We saw more ducks, and chased them, again, for what felt like miles before they darted into the shore shrubs.  At one point, the fog was rising up from the river in a sea of columns.  Each one was swirling towards the sky, reaching over three feet in height, then vanishing. 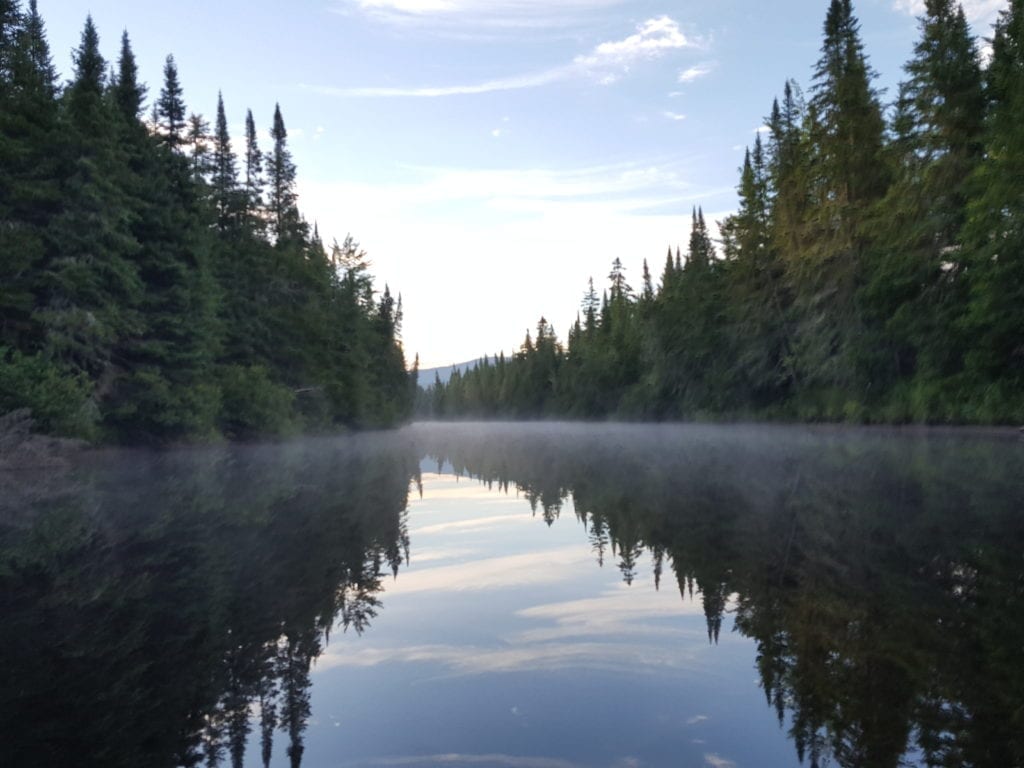 We paddled towards distant mountains.  The silence of the morning was close to indescribable.  Being surrounded by so much natural and undisturbed beauty in such a peaceful setting was truly incredible.  Each turn in the river opened up to scenes that were more beautiful than the last.  It would have been a fantastic morning to fish, but the view was too breathtaking to do anything other than paddle on and see what was around the next bend.  We knew it was only a matter of time before the fog lifted, and we didn’t want to miss a single moment of it.

Even after the fog lifted and the sun rose higher into the sky, there was no breeze.  We enjoyed staring into what seemed like two mirror-image worlds as we paddled the last section of the Moose River.  Eventually, the river picked up speed, although not a lot, as we neared the final rapids- Attean Falls.  As a novice paddler, when I hear the word “falls” I immediately conjure the image of Niagra, or Grand Falls up near The Forks when they open the dam.  I envision a massive, powerful charge of water roaring over a rocky cliff and plunging into the river below.  That wasn’t the case with Attean Falls.

We had been cautioned about running the falls since there are a lot of rocks and boulders in the rapids.  The first set is Class I, although the river was about mid-level.  The rapids looked bony and we weren’t up for any more crashes.  We decided to portage the first set.  The portage was beautiful, level, and brief, as you can see below:

The part no one mentions is that the falls are in two separate sections with quickwater in between them. You have to drop your boat back in the water between the falls and paddle to the next portage, just a short ways up.  There is a campsite located at the second portage.   That portage is even shorter – just a quick hop over the river bank. We decided to take the portage again because this section of the falls looked bony as well.

After the falls it isn’t long before you reach Attean Pond.  You leave the river behind and find yourself in front of islands with a backdrop of mountains as you paddle through a sea of bright green water grass.  In the right season, that grass lays on top of the water and creates serious drag.  Be very careful when you reach the pond and make sure you have your bearing correct.  It’s easy to get turned around in Attean because the distant islands blend with the shoreline, making it hard to tell where you are. The short version- stay to the right.  The better version- use your compass and save yourself some paddle time!  The wind can pick up at any time on Attean, so it’s well worth it to know where you’re going.

We reached the pond and thought we were the only ones out until we paddled past the first island.  Remember that group of 8 canoes who were trying to figure out where the Holeb Falls portage was?  They were back, and this time they were looking for Attean Landing!  Lucky for us, they had taken a wrong turn (again!), paddling towards the left side of the pond after leaving the river instead of the right. We shifted gears and paddled hard to gain water on them, knowing they would take up most of the shoreline unpacking gear and loading their van when they got back. They eventually realized we knew where we were going (again!) and started to follow.  Luckily they were much slower than us.

We knew we were getting close when we saw the landmark Birch Island.  Keeping to the right, we turned into the cove towards Attean Landing.  We reached the landing with plenty of time to spare, and some great stories to tell.  The last leg of our journey was 10.25 miles and we reached the landing at 9:30, for a total of 4 hours of paddle time.  It was a bittersweet moment- we were excited that we had completed such an amazing adventure, and sad it was over.

We had a great talk with Karl again.  I think we must have stayed at the landing for an hour after we packed just talking to him!  He has a lot of great information and is a very knowledgeable Maine Guide.  We look forward to talking to him again sometime.

Over but not Over

As I finish sharing our Moose River/Bow Loop adventure, I’m realizing that I have a really bad case of Paddle Fever.  I’ve got to get back on the river and connect with Maine’s untamed nature again, and soon.  Looks like Henry’s gonna have to dust off the wannigan because we’ve got some adventure to go find!

Until next time, enjoy Maine’s beautiful outdoors, and as always,
Stay Untamed!

Did you miss the boat?

Looking for Maps and Quick Facts?

The NEW 2022 Maine ATV Trail Map Atlas is ready to ship! For a limited time use coupon code OPENTRAILS for FREE SHIPPING on any order! Dismiss